The flavour of paprika really shines in this delicious Hungarian Beef Goulash. Serve with a helping of homemade spaetzle or chunks of crusty bread to mop up the gravy. This meal is sure to become your new family favourite.

The first time I ate Hungarian beef goulash was many years ago on a snowy winter’s evening in a little cafe in Budapest, Hungary. I was on a business trip at the time, and had arrived late Sunday morning. After an afternoon spent sightseeing, I was more than ready for supper and was making my way back to the hotel. Quite close to the hotel, I passed a tiny cafe with a sign win the window which read ‘traditional Hungarian Goulash‘.

Looking through the glass, I could see several tables set for supper, in front of a roaring log fire. I was cold, tired and hungry. I went inside, sat down at a table and placed my order.

The food, when it arrived, was amazing. A huge steaming plate of Hungarian beef goulash, made with tender chunks of beef, liberally flavoured with paprika, and piled on a mound of homemade noodles. The beef was cooked to melt-in-the-mouth perfection, with added spice from the red peppers and smokey flavoured paprika.

The homemade noodles (in Hungary they are called nokedli) were little pillows of deliciousness. They were like tiny dumplings, silky smooth, with chewy texture. The perfect accompaniment to the beef goulash. If you’d like to try making your own, I’ve posted a recipe for spaetlze, which is the German version of these noodles, and made in exactly the same way.

It might have been the large glass of red wine that accompanied the meal, I can’t say for sure. But I can safely say that it was one of the best meals I have ever eaten.

It is many years since that first taste of Hungarian beef goulash, and what I have tried to do here is recreate that same taste from memory. It might not be absolutely authentic, but I think I’ve managed to capture the essence of the dish. I hope you enjoy it as much as I did!

What is Hungarian Beef Goulash

Hungarian Beef Goulash is one of the national dishes of Hungary, dating back to the 9th centruy. It was originally eaten by herdsmen, who were called gulyas. Over time this word has evolved to mean both herdsmen, and also the stew they ate, which we know as goulash.

It is a slow-cooked stew, the main ingredients being beef and onions. Other vegetables, such as potatoes, carrots, parsnips and red pepper can be added. The meat is normally the cheaper cuts of beef such as shin, chuck or stewing beef. This type of meat lends itself to slow cooking, the gelatinous fibres breaking down during the cooking process, resulting in tender, juicy meat.

Goulash is well-known for its strong paprika flavour. Hungary is one of the leading producers of paprika in the world, the flavour ranging from sweet and mild to spicy and firey. Sweet paprika is the version normally used in goulash.

How to make Hungarian beef goulash

You can get the exact measurements and detailed instructions in the printable recipe card at the end of this post.

Secret tip for lovely thick gravy. Keep one potato aside and grate it instead of cutting it into chunks. During cooking the starch from the grated potato helps to thicken the gravy.

To cook beef goulash in a pressure cooker

To cook beef goulash in a slow cooker

To cook beef goulash in a casserole or Dutch oven

A note on thickening and seasoning

Once the goulash is cooked taste for seasoning and add more salt if necessary.

If the gravy hasn’t thickened sufficiently, make a slurry of 1 tablespoon cornflour and 2 tablespoons water, and stir in gradually until the desired consistency is reached.

Sour cream is normally served with goulash, and this can be stirred into the finished dish, or spooned on top as a garnish.

And of course, don’t forget the homemade spaetzle to serve with it.

The cold weather we’ve been having recently really lends itself to hearty, warming meals.

Don’t forget to check out my handy Cookery Conversion Calculator if you want to convert any of your recipe measurements from grams to cups, ounces, tablespoons or millilitres and vice versa. You can also use the calculator for converting oven temperatures between Fahrenheit, Celsius and Gas marks.

If you live at a high altitude you may find you need to adjust your baking recipes to compensate for this. You can read all about it in this post on baking at high altitudes.

Why not pin this recipe for Hungarian beef goulash so you can make it later. 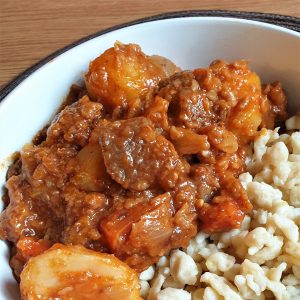 The flavour of paprika really shines in this delicious Hungarian Beef Goulash. Serve with a helping of homemade spaetzle or chunks of crusty bread to mop up the gravy. This meal is sure to become your new family favourite.
Recipe by: Veronica

Slow cooker instructions   Oven / casserole instructions You can either stir the sour cream through the finished dish, or serve topped with a spoonful of sour cream for garnish. This goulash can be served over homemade spaetzle or chunks of custy bread to mop up the gravy.

Let’s have a barbeque 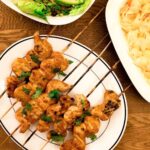 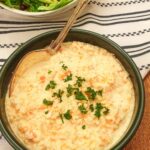 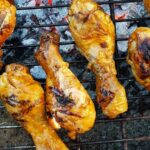 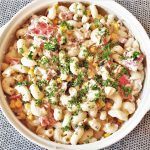 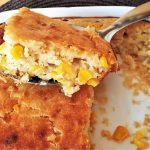 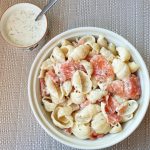