A scotch egg is one of those great classic English dishes that have to be eaten freshly homemade to be appreciated. Just imagine a perfectly boiled egg, surrounded by juicy pork sausage meat, encased in the crispiest coating of fried breadcrumbs. Read on for my step-by-step guide on how to make scotch eggs, and you could be eating one for your supper tonight.

Origin of the scotch egg

Contrary to popular belief, the Scotch egg did not originate in Scotland. There are many theories as to the true origin, but not one of them mentions Scotland.

Another theory is that scotch eggs originated in the North Yorkshire seaside town of Whitby, where they were made by William J Scott & Sons. These eggs were known as Scotties and were originally encased in a creamy fish paste. Once these eggs started being sold on the high street, the fish paste was replaced by pork mince which made the eggs easier to handle, and less prone to breaking apart.

A third theory, and one that I quite like, is that scotch eggs were invented in London by Fortnum and Mason as a delicacy for the gentry to take with them in their carriages when travelling. The idea being that the mince coating would help to hide the rather distinctive aroma of a plain boiled egg.

But regardless of the origin, the good old scotch egg stands alongside other British classics such as Meat and Potato Pie with Mushy Peas, or Toad-in-the-hole, or even Lancashire Hotpot. And let’s not forget the great British pork pie!

Read on for instructions on how to make scotch eggs for yourself.

What are scotch eggs?

Scotch eggs are simply hard or soft-boiled eggs wrapped in pork sausage meat and coated with egg and breadcrumbs. They are then deep-fried until the breadcrumb coating forms a crispy outer shell, and the pork sausage layer on the inside is cooked through.

A scotch egg is perfect for packing into a picnic, or for eating as part of a ploughman’s lunch, with pickles and a bowl of relish for dipping. It can even be eaten with a plate of crispy potato fries and a helping of baked beans for a quick and easy supper.

How to cook your boiled eggs

The consistency of the yolk is a matter of debate. Some people prefer a runny yolk, whereas others, like myself, prefer the yolk to be more firmly set.

The eggs should be at room temperature. If you take your eggs directly from the fridge then these timings will not be accurate.

Note, these times are based on an altitude of sea level. If you live at a higher altitude, you may need to increase the cooking time for the eggs. See my post on baking at high altitudes for more information.

To make a basic scotch egg, which is what this recipe is about, you can just take your favourite pork sausage and remove the skin. Then carefully wrap the sausage around the egg.

If you want to add extra flavour to the sausages you can add one or more of the following to the sausage meat before wrapping it around the egg:

Some people say this is the best part! A crispy layer of delicious golden deep-fried breadcrumbs stuck onto the sausage with beaten egg provides a satisfying crunch as you bite into the scotch egg.

You can use normal breadcrumbs if that’s all you have to hand, but I find that panko breadcrumbs give a bit of extra crunch.

If you want to make an even thicker shell around your scotch egg, you can coat them twice, but I find that one layer of panko is sufficient.

If you really have to, you can skip the deep-frying, and bake these in the oven. But believe me, you will not get the same crispy crunchiness on the shell if you do this.

You can get the complete list of ingredients and full instructions on how to make these scotch eggs on the printable recipe card at the end of this post.

How to make Scotch Eggs

Coat and fry the scotch eggs

Scotch eggs are perfect to pack for a picnic. If you enjoyed them, why not try some of these other picnic recipes too.

Why not pin this recipe for Scotch Eggs so that you can try them for yourself.

Recipe – How to make scotch eggs 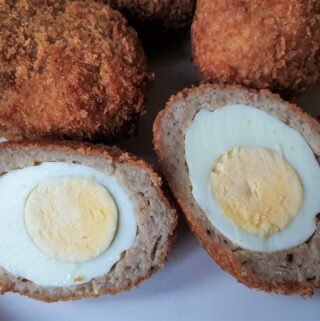 How to make scotch eggs

Cook your eggs as per the timings below.  At the end of the cooking time remove the eggs immediately from the hot water and place in a bowl of ice cold water. Form the patties – coat your hands in flour to prevent the meat from sticking.  Each patty should be approximately 1/4″ thick and large  enough to completely surround the egg. If you have a deep-fat-fryer you can use that to fry the eggs. Just follow the manufacturer’s instructions to bring it to temperature(170C / 340F), then lower the eggs into the oil and fry for about 4 minutes until golden brown Nutrition information is per egg, and I haven’t included the oil used for cooking.

Previous Post: « Bobotjie – a traditional South African curry bake
Next Post: Easy all in one apple cake tray bake – made with oil » 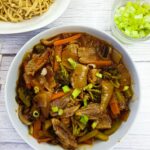 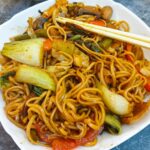 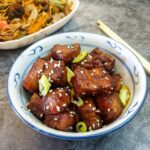 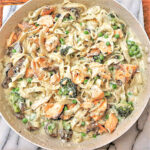 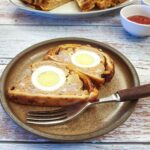 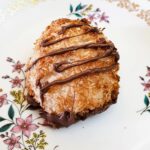 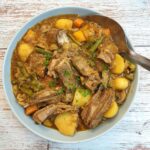 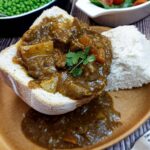 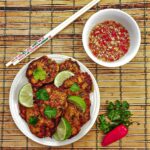 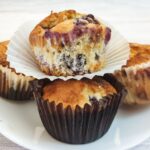