A traditional German dish, juicy, tender pork knuckle with saute potatoes and the crispiest, crackly skin. Serve with vegetables and perfectly cooked creamy saute potatoes for a meal you will want to eat again and again!

There are many names for this dish, depending on where you live in the world. In Germany it is either Schweinshaxe or Eisbein, in Poland it is known as Golonka and the Swedes call it Flasklagg. If you are in Austria, it goes by the name of . My particular favourite is the Italian name for pork knuckle, which is Stinco. In my personal vocabulary , I call it delicious!

What is pork knuckle?

Pork knuckle is traditionally made from a boiled ham hock and can be served either just boiled, with skin, or you can put it under the grill to convert the soft skin into a crispy crackly coating.

You can also roast the pork knuckle in the oven, rather than boiling, which will result in a nice crispy skin. I prefer to boil it first in the pressure cooker because I think it makes the meat juicier. The meat from the knuckle has a lot of connective tissue and ligaments and therefore it needs to be either boiled for a long time or baked very slowly in the oven to break down this tissue and soften the meat.

Properly cooked, pork knuckle is one of the most tender and tasty joints of meat you can get.

What part of the pig does it come from?

A pork knuckle is a cut of meat from just above the trotter on either the front or back leg of the pig. The cut from the back leg is larger than the one from the front leg, but both taste the same and can be cooked in the same way.

I found this picture on Wikipedia, which illustrates the cut perfectly.

How to cook a crispy pork knuckle

For a complete list of ingredients and full instructions on how to cook a crispy pork knuckle, see the printable recipe card at the end of this post.

It takes about 2 hours to pressure cook the meat and crisp the skin. The potatoes take about half an hour to prepare and cook, but they can be done whilst the meat is cooking so I haven’t added this to the total time.

Get the meat in the pressure cooker

Rinse the knuckles in cold water and put them in a pressure cooker with 1 carrot, 1 stick of celery, 1 small onion, about 10 peppercorns and 1 teaspoon of salt and cover with 1/2 litre of water. No need to chop the veggies first – they are only in there to add flavour.

I like to cook this in 30 minute stages . After the first 30 minutes I open the pressure cooker and give the meat a bit of a stir around. Then cook again for another 30 minutes. Depending on the size of the pork knuckles they may be fully cooked after the second 30 minutes. If not, I give them a bit longer.

Cook for another 30 minutes then release the pressure and open the pressure cooker. Check the meat do see whether it is done.
The meat will be ready if the skin is translucent and the meat can be easily pierced with a fork, and looks as though it is ready to fall off the bone. The meat will also have pulled back from the bone.

This stage is where you give your meat a final cook, if it is still not quite done after the first 2 stages.

I was cooking 2 large knuckles and found that they weren’t completely cooked so I gave them another 30 minutes.

Use your own judgement
The length of cooking time depends on the size of your pork knuckles. You may find you only need (say) another 15 minutes.

When the pork knuckles are done you can remove them from the pressure cooker. A large slotted spoon is ideal for this.
Place them in a baking tray, sprinkle with salt and put them in the middle of your oven with the grill turned on.
Be careful THEY BURN EASILY. You need to keep your eye on them and turn them occasionally so that they crisp all over.
If you find the meat is browning too much, cover the meat with a piece of tin-foil and leave only the skin exposed.

Remove from the oven

Once the pork knuckles are crispy you can remove them from the oven and serve. I like to serve them with saute potatoes and a selection of vegetables.

How to make the saute potatoes

You will need a large frying pan with a lid.

For the saute potatoes you need to have twice as many potatoes as onions. If you are making this for four people you will need 6 medium sized potatoes and 3 medium onions.

I always brown the potatoes in a little oil before adding the onions. This way the saute potatoes tend to come out nice and brown, whereas if you fry the onions first and then add the potatoes they still taste the same, but they don’t have that lovely golden brown colour.

Chop the potatoes into 1″ cubes and place them in 2 tablespoons of hot oil in a frying pan.
Sprinkle with salt and allow to brown over a hot heat stirring occasionally. I like to brown the potatoes first as this gives a good colour to the saute potatoes.

Now add the onions to the potatoes. Give them a good stir, turn down the heat and cover with a lid.

Allow the potatoes and onions to saute gently, stirring occasionally until done. This step takes about 10 minutes. The potatoes should be soft and creamy and the onions should be nice and soft.

How many people will 1 pork knuckle serve?

We are a family of 2 and I normally make one knuckle each purely because we are greedy and both like the crackling. There is always a lot of meat , but it makes lovely sandwiches.
This also depends on the size of the knuckle- a small one would be sufficient for one person – a large one would probably be too much for one person to eat.

Do I have to use a pressure cooker?

No, you can boil the kunckles in a normal saucepan. Depending on the size, this could take up to three hours. A pressure cooker just speeds up the process.

What can I serve with this?

In Germany this cut of meat is traditionally served with sauerkraut (pickled cabbage).
I like to serve it with saute potatoes and a bowl of fresh steamed vegetables. You could serve it with mashed potatoes if you prefer (mash your potatoes with a teaspoon of mustard and a knob of butter for instant mustard mash).
A dish of apple sauce makes a nice accompaniment, or a little mustard on the side.

What can I do with the cooking liquid?

The cooking liquid has a lovely flavour. I strain it through a sieve and keep it in the fridge for adding to stews and casseroles.
The liquid turns to jelly when cold (because of all the gelatin in the meat fibres) and the fat rises to the top and can be skimmed off.
It will keep for up to a week in a sealed jar in the fridge, or you can freeze it.

What do I do with the leftovers?

These knuckles have quite a lot of meat on them, and for those with a smaller appetite, there is always a lot leftover. Why not turn the leftovers into mini pork pies?
Just line muffin tins with shortcrust pastry, fill with chopped up leftover meat, top up with the cooking liquid, cover with a lid of pastry and bake in a hot oven (200C/400F) for 15 to 20 minutes until the pastry is golden.
Allow to cool before eating.

Previous Post: « Garlic stuffed mushrooms with Ham and Cheese
Next Post: Easy Chicken a la King – on the table in 30 minutes » 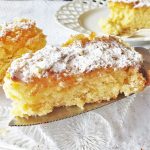 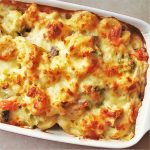 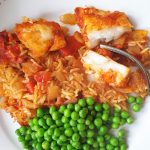 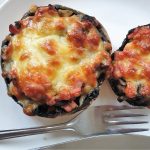 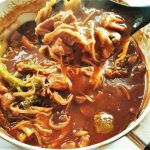