It’s so easy to make your own homemade sage and onion stuffing for your chicken or turkey. And you can even pimp it up by mixing in some good quality pork sausage meat. It takes only minutes to make and tastes WAY better than the boxes of stuffing that you buy in the supermarket.

The best ever stuffing recipe

Just imagine a plump juicy chicken stuffed with homemade sage and onion stuffing. And this isn’t just any old stuffing made by mixing a box of dried, seasoned breadcrumbs with boiling water. Oh no, this is my special homemade sage and onion stuffing with sausage meat. Be prepared for a flavour sensation. I promise you, once you’ve tasted this stuffing you will never go back to the boxed stuff again.

Now, I know you are going to say ‘but the boxed stuff is so easy to mix together‘. And yes, of course it is. But if I were to tell you that this is just as easy, but delivers 100% more flavour, would you try it? Of course you would!

The beauty of this stuffing is that you can mix up a large batch, use some for stuffing a chicken, and roll the rest into balls and freeze the rest for later meals. So to be honest, this is actually a real time-saver.

Just imagine a chicken stuffed with this magnificent stuffing. As the chicken roasts, the fat from the seasoned sausage meat runs out into the chicken, and at the same time, the cooking juices from the chicken baste the stuffing, giving you additional flavour, both in the chicken and in the stuffing. It’s a win-win situation.

And of course, you don’t have to cook this sausage meat stuffing inside a chicken. You can roll it into balls and pop them in with your roast potatoes and serve stuffing with every roast meal.

You don’t need much by way of equipment. You will need a mixing bowl for mixing the stuffing balls. A food processor makes short work of chopping onions and breadcrumbs, but you can get away with using a box grater if that’s all you have.

This recipe will make 12 large or 24 smaller stuffing balls.

Remove the sausages from their casings and place them in a mixing bowl along with the breadcrumbs, sage, parsley and salt.

Get your hands in, and mix everything together until everything has been well combined.

(You can use a spatula or wooden spoon if you prefer).

So, now that you’ve mixed your stuffing, what are you going to do with it?

How to stuff a chicken

Roll half of the stuffing into a large sausage shape.

Insert the stuffing into the neck cavity of the chicken.

Roast the chicken as you would normally do. The remaining half of the stuffing can be frozen and used to stuff another chicken, or can be rolled into balls and frozen (see below).

How to make stuffing balls

This is my preferred method.

Roll the stuffing into golf-ball sized balls. This recipe should yield 12 balls.

Place the stuffing balls onto the rack of an air-fryer oven (lined with tinfoil to catch any drips) and fry for 10 minutes.

Turn the stuffing balls over and fry for another 5 minutes.

What you end up with are perfectly cooked stuffing balls that you can serve with any roast.

Do I have to cook these in an air-fryer oven?

No, you can cook these in lots of different ways:
– use a in a regular air-fryer (just consult your manual for timings);
– place the stuffing balls in the baking tray with your roast potatoes (about 20 minutes before the potatoes are done).
– fill a small casserole dish with the stuffing and bake it in the oven for 20 minutes while the chicken is resting. That way you get to serve up a large spoonful of stuffing, rather than a small stuffing ball!

How do you freeze stuffing?

This sage and onion sausage meat stuffing can easily be frozen. I normally make a big batch and cook half with my roast. The remainder gets rolled into balls and placed on a baking tray in the freezer to open-freeze.
Once the stuffing balls are frozen solid, just transfer them to a large Ziploc freezer bag and store them for up to 3 months.
To use, just remove as many stuffing balls as you think you will need (plus one or two extra – believe me, they WILL get eaten) and place the frozen balls in with your roast potatoes. Do this about 20 minutes before the potatoes are ready.
If you prefer you could just place the frozen stuffing balls on a baking tray and bake in a hot oven (200C / 400F) for 20 minutes, turning once.
You could also just pack the mixed stuffing into a disposable aluminium baking dish and freeze. You can cook this from frozen too, but allow 25 to 30 minutes in a hot oven to give the stuffing time to cook through.

If you would like to make your own sage and onion with sausage stuffing, why not save the recipe to one of your Pinterest boards so you can find it easily when you need it? Just click the image below.

Alternatively you can save the recipe by clicking the floating heart on the right-hand side of the screen.

Why not try serving sage and onion sausage meat stuffing with one of these dishes: 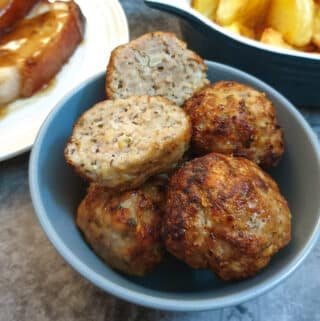 It's so easy to make your own homemade sage and onion stuffing for your chicken or turkey. And you can even pimp it up by mixing in some good quality pork sausage meat. It takes only minutes to make and tastes WAY better than the boxes of stuffing that you buy in the supermarket.
Recipe by: Veronica
Side Dish
American, British
Calories 101
Prep 15 minutes
Cook 20 minutes
Total Time 35 minutes
Servings: 12 large stuffing balls
Print Pin Comment Bookmark Saved!
Prevent your screen from going dark
4.67 from 3 votes

If you don’t have a food processor you can grate the bread on a cheese grater and use a sharp knife to cut the onion as finely as possible. You can use fresh sage and parsley if you prefer, but you will need to use 3 times the amount of fresh herbs as dried.  Replace each teaspoon of dried herbs with one tablespoon of chopped fresh herbs. This recipe makes sufficient stuffing for 2 large chickens.  You can freeze any leftover stuffing in a plastic bag and use to stuff another chicken later.  Allow to defrost before using.  You can also roll the stuffing into balls and open-freeze on a baking tray.  Once the stuffing balls are frozen, transfer the to a ziploc bag and freeze for up to 3 months. Cook stuffing balls from frozen, either in a baking dish on their own, or nestled amongst your roast potatoes.  Stuffing balls will take approximately 20 minutes to cook. 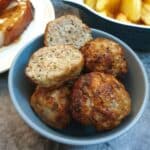 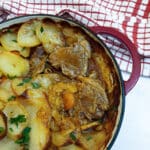 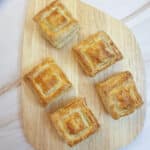 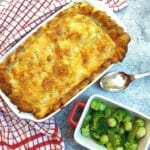 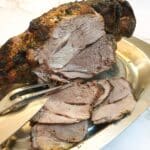