Layer chopped tomatoes and onions in your slow-cooker, top with marinated beef cubes, cover with a mixture of stock and spices and come home to a mouth-watering meal of spicy slow-cooker beef Trinchado.

Trinchado is simply a spicy beef stew, which you will find on the menu at any of the numerous Portuguese restaurants in South Africa.

It’s made with tender chunks of stewing beef in a spicy tomato and onion gravy, flavoured with red wine and peri-peri sauce. Trinchado is traditionally served with chunky bread to mop up all the delicious sauce, and a side helping of French fries.

I’ve got another recipe for quick and easy beef Trinchado which uses slices of steak and is very popular with my readers. However it does involve some hands-on cooking, so I thought I’d adapt it for those of you who prefer using a slow-cooker.

Because of the long, slow cooking time, you can get away with using cheaper cuts of stewing beef, such as chuck or flank rather than the more expensive cuts of steak. But believe you me, you lose absolutely nothing in the flavour department. This slow-cooker beef Trinchado turns out tender, juicy and succulent, with all the fabulous peri-peri flavour, but with minimal effort on your part.

Red wine adds a richness and depth of flavour to the Trinchado and I would recommend adding it. However, if you don’t want to add alcohol you can substitute the red wine with extra stock, or even use red grape juice instead.

This slow-cooker Trinchado recipe is the ultimate one-pan meal. You don’t even have to brown the meat first. Just marinate it in a mixture of cornflour and Worcestershire sauce for 30 minutes and then layer it with tomatoes and onions in a spicy sauce and forget about it for a few hours until you are ready to eat.

You end up with pieces of beef that are so tender you could cut them with a fork!

You can even serve it directly from the inner liner of your slow-cooker, so you save on loads of washing up! How convenient is that?

Peri-peri is a small red chilli, similar to a bird’s eye chilli, grown in South Africa and the neighbouring Mocambique. This chilli, and gets its name from the Swahilli word for pepper, which is peri, but because it is so hot, the name has been doubled to be peri-peri or pepper-pepper.

The most popular use of the peri-peri chilli is in the famous Nando’s peri-peri sauce, which I have used in this recipe. If you’d like to try a Nando’s copycat chicken recipe, why not take a look at my recipe for oven-baked peri-peri chicken.

To make this dish you will need a slow-cooker. I have this one with low, medium and high settings. If you are out at work for most of the day, you may prefer a slow-cooker with a timer.

Ingredients for the beef and the marinade

Ingredients for the gravy

What to serve with beef Trinchado

However, there’s nothing stopping you from serving it with a pile of creamy mashed potatoes and a selection of your favourite vegetables.

Trinchado is believed to have been introduced into South Africa by the Portuguese immigrants from neighbouring Angola and Mocambique. The word Trinchado simply means ‘carved’, hence the carved or cut up pieces of meat in the stew.

How do I freeze Trinchado?

Pack the cooled stew into a suitable freezer container and freeze for up to 4 months. To use, defrost in the refrigerator and then tip the contents of the container into a saucepan and reheat on the stove.
You could also defrost and reheat in the microwave.

Can I make this dish in advance?

You could prep the Trinchado the night before and leave it in the inner lining of your slow-cooker (covered with the lid) in the refrigerator.
Next morning before you go to work, simply replace it in your slow-cooker and leave it to cook on low for 6 to 8 hours. (It won’t come to any harm if you leave it for longer 🙂 )

How do I make paprika French fries?

The easiest way of making paprika French fries is to buy a bag of good quality frozen chips. McCain’s is the brand I use in the UK.
Spread an even layer of the chips onto a baking sheet and sprinkle liberally with salt and paprika then bake them in a hot oven (200C / 400F) for about 30 minutes.
Turn them with a spatula halfway through the cooking process.
If they haven’t crisped sufficiently after 30 minutes, leave them for a few minutes longer.
If you prefer to make your own French fries, you can simply sprinkle them with salt and paprika when they come out of the fryer.

If you’d like to try this recipe for slow-cooker beef Trinchado, why not save it to one of your Pinterest boards so you can find it easily. Just click on the image below.

If you enjoyed this slow-cooker beef Trinchado, perhaps you’d like to try some of my other meals made in a slow-cooker: 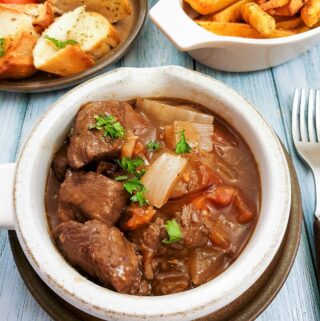 How to make paprika french fries: How to peel tomatoes: 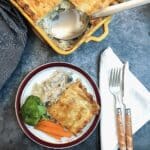 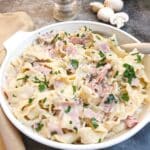 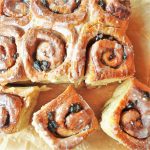 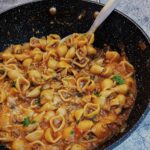 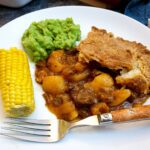 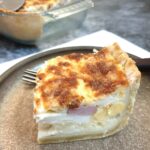