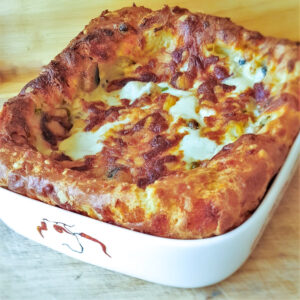 Want something different for dinner tonight? Try this Chicken and Mushroom Puff Pie. Creamy chicken and mushroom filling surrounded by a ring of crispy cheesy gougere pastry. Just sit back and wait for the compliments!
Recipe by: Veronica

For the Chicken and Mushroom filling

It is important to allow the mixture to cool before adding the eggs, otherwise the heat from the mixture will cause the eggs to scramble. The mixture will become lumpy when you first add the egg.  This is perfectly normal.  Just continue beating until it is all incorporated and comes together as a smooth paste. You can use any hard cheese that grates well - it doesn't have to be cheddar. If you bring the chicken to boil in a pan of water and then turn the heat off and let it stand will allow the chicken to cook through.  I find this is an ideal way to cook a chicken breast for use in a recipe.  If the chicken still has traces of pink it will continue to cook when the pie is in the oven.  Cooking the chicken this way ensures the chicken remains moist and juicy. Allow the filling mixture to cool before adding to the pastry in the pie dish.  If you add the filling while it is still hot the pastry will not rise properly.